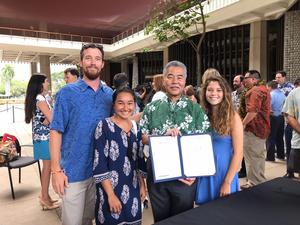 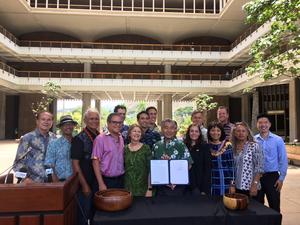 The Wipeout Crew has been instrumental in the passing of Bill 2571 which bans sunscreens that contain chemicals harmful to coral reefs. The bill was signed by Gov. Ige on July 3rd. Kaiser's Wipeout Crew impacted the bill's passing by ...
Kaiser's Wipeout Crew impacted the bill's passing by bringing awareness of the damaging effects that oxybenzone and octinoxate have on coral reefs.
Advisor Paul Balazs added, "The Wipeout Crew participated in this ban by attending presentations and open forums at the Capitol, becoming informed about the issue. They held booths at Hanauma Bay and the Waikiki Aquarium to teach the public. They made it a focus point in East Honolulu by hosting the biggest sunscreen swap in the state and informing their peers at Earth Day.
Participating in the legislative process was a journey in itself. We had to learn the process of how a bill is made. It's not as simple as knowing the science and wanting change, obviously. We attended Civics is Sexy, a lecture series at the Capitol put on by the Surfrider Foundation and members of the local government. The Wipeout Crew learned how to navigate the political landscape as an informed and inquiring public group. They wrote online testimony, taught their peers how to do the same and were even able to attend public hearings and offer their own in-person testimony to the hearing committee. Following this bill has been a wild ride. Thank you for the support."
“Oxybenzone and octinoxate cause mortality in developing coral; increase coral bleaching that indicates extreme stress, even at temperatures below 87.8 degrees Fahrenheit; and cause genetic damage to coral and other marine organisms," according to the bill.
While the Bill won't take effect until 2021, this is a start Governor Ige is quoted saying, "This is just one small step toward protecting and restoring the resiliency of Hawaii's reefs."
We can start now by choosing reef safe sunscreens and spread the awareness.
Congratulations Wipe Out Crew!