"The Ghost Party" Possesses the Audience 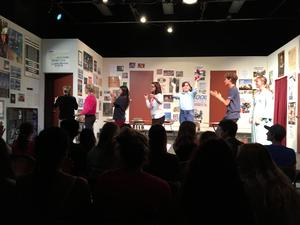 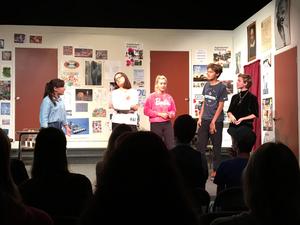 Through laughter, fears and tears, "The Ghost Party" exposes the secrets between relationships and mends them with glee.
If you did not see "The Ghost Party" consider yourself ghosted.
The play written by Diana Grisanti brings together an unlikely group of students, who are somehow connected with each other, for an overnight Physics club Lock-In. A comedy at nature with musical numbers, this play was a full treat for the soul.
Immediately the audience is drawn into the cast of characters as they arrive for an overnight stay in the Physics room. By the range of personalities and what each character wants to get out of the experience, one can tell that this sleep over is either 1) going to be an extremely long night, or 2) doomed to be a disaster.
The cast was remarkable and very talented. Each possessing a personality in which the audience can identify with:
Haley (played by Aisely Waldrop) - hides her fear that her mother was recently diagnosed with cancer, and therefore becomes distant with her close friend, Mackenzie.
Mackenzie (played by Aiko Enomoto) - showing her character by wearing a bright pink 'Barbie' sweatshirt, provided much of the comic relief to escalating situations.
Gaby (played by Jordan Griffin) - was the highly enthusiastic only-person-who-was-actually-interested in Physics member of the group. She also had a one-sided relationship with her cousin, Claire.
Claire (played by Michelle Matsumori-Kelly) - was more distracted with her relationship with her boyfriend than wanting to be honest with Gaby - because that would mean facing her fear.
Sam (played by Laniakea Chun-Rivas) - was Haley's 'safe place' because he knew what was happening in her life, much to Mackenzie's jealousy.
Sydney (played by Neilly Frankel) - was the Student Activities Leader in charge of keeping these personalities together and motivated without incident. Tough job.
The only common factor among this group was the rumor of the ghost Rosemary and how she haunted the halls looking for her sister, Louise. Both roles were played by Nanea Kay who also took on the roles of Fabulist and Fiona Tazwell and Mrs. Tazwell (the teacher advisor). Nanea's roles were instrumental in keeping both the group and the storyline moving. It was amazing to watch Nanea take on a multitude of roles so seamlessly.
With artful dialogue and great song numbers, this play was amazing! It was so good in fact, this reviewer forgot to take pictures! Sorry! I can't wait to see what the Black Box Theatre produces next. Great job, everyone!
The play was directed by student director - Ruby O'Malley with Mentor-Director & Producer - Michael Cowell. music was composed and arranged by Michael Cowell and Sean T.C. O'Malley.
Artisans:
Sound Designer - Michael Cowell
Lighting Designer - Claire Paul
Set - Michael Cowell and Cast
Produced by - Ann Ogilvie
Graphic Artwork - Nala Dombrowski
Costumes provided by - Diamond Head Theatre
Technical Crew:
Stage Manager - Katelynn Nakanishi
Follow Spot - Nala Dombrowski
Lights - Katelynn Nakanishi and Kyle Rodriguez
Stage Crew - Kathy Seo and Alison Agno
Sound - Kaylee Sosa
Tickets - Maile Tran