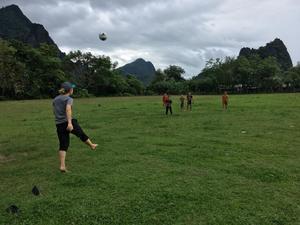 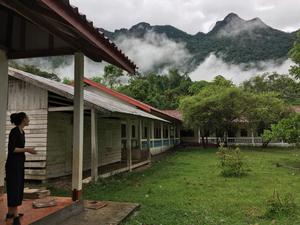 The adventure continues as we follow 13 IB students who traveled to Thailand and Laos over the summer. This article focuses on Laos and how Commitment, Leadership, Achievement, Stewardship and Service = CLASS, was prevalent everyday.
NA SOM VILLAGE, LAOS (Part II)
by Paul Balazs
The second part of our trip took us up to the highlands of Vang Vieng, to a small Hmong village called Na Som. The people of the village traveled there and developed their village just about 50 years ago, so it's relatively new but contains some rich customs and traditions nonetheless. While driving up the hill side to the village, we passed several resorts. It would come up later in conversation as we looked at some of the issues related to having a resort and resort-activities so close to an indigenous small village. As we pulled into the village late into the evening after a full day of driving, we unloaded into our new home for the next few days -- a home that had been built by other students and groups in years past. As we strung up our mosquito nets, realized there was no Wi-Fi and took a tour around the home base, it became pretty clear: the days of air-conditioned living at the Ricefields Base were definitely over.

The "rustic" nature of our travel program was definitely upon us - a reality that we were all actually looking forward to.

While our stay in Na Som Village featured full service, cultural activities, night life and local adventure, our service project was at the center of our purpose there. The school only recently developed buildings with walls, ceilings and floors. Our project was primarily to install tile floor in two of their rooms and on the lanai that wrapped around the building. For most of us, tiling was a new skill we had to learn to develop. Making cement, grouting, and measuring and cutting tiles were among the skills we learned quickly from the people in the village and with whom we worked with the next few days.

On the second day of service, the village gave us another task - to build a flagpole. In the Na Som village (and perhaps others), the Laotian government appropriates extra funds and resources for schools that fly the national flag.

Tiling the floors was helpful as it provided an aesthetic appeal to the classrooms for the children that made a world of difference, but for the school master and the village, the flagpole could be used to solve financial issues that extend possibly outside the walls of the school.

On one of our afternoons, we were fortunate to sit with the a few of the important elders of the village. We were honored to that the two chiefs of the village (a man and woman), the school master, the head of the women's union, and the people's spokesperson took time to sit with us and answer questions about their village and culture. To hear directly from an indigenous people without having to read and interpret it in a book or documentary hoping we get it right was a thrilling experience.

Knowledge gained through experience and a gaining of perspective quickly turns itself into wisdom and a depth of understanding that is sorely missed out on if we for a second stop listening. In this conversation we learned quickly the goals of the village.

Education plays a large role in their village as many students will leave the village seeking employment and education elsewhere. The school master shared that he wishes people that are educated in the village and become wise to the world around them through a furthering of education - skilled in trade and vocation - return to the village to provide aid. I think we have something in common!

We also learned the importance of community in this village. The chief shared with us that every single person spends time in the rice fields. Because of the extreme seasonal shifts, only half the year produces rice in great quantity. Being their only real crop - a staple food as well as an economical resource to sell to nearby villages and hotels - having everyone in the fields during the planting seasons is incredibly important. The chief himself had just come in from the fields and mentioned he'd be returning when our conversation was finished. This was inspiring to hear. This type of leadership is what makes a community thrive. To know that they're all in this together must be a realization that brings the community a great deal of satisfaction, respect of each other's value and improve the relationships within the village.

While many of the evenings were quiet and spent storytelling and playing games like "Black Magic" and "Snaps", we did take one evening to head down to the city of Vang Vieng. During the daytime in the village, while we were playing soccer with the children, talking to the locals or working on our service projects -- tourists would speed through the village in their dune-buggies, throwing up mud and dirt on the homes, and endangering the lives of the people and the animals. It was hard to watch occur in such a beautifully raw and natural village. To head down into the bustling town's nightlife 30 minutes away was a shock, that despite the daily nuisance of the tourists driving through the village, caught us all off guard. As we unloaded from our vans, tourist groups piled out into the streets from their Jeeps, wet from the river and bottle, half-naked, loud and boisterous ready to take on the night.

To think, just 20 minutes away from this chaos was a village with barely enough electricity. A quiet village that depended on a crop which was available only if the season and the weather were right. Where schools were still being tiled and water that was only just recently piped in from a nearby river.

Despite this, we did have a wonderful time that evening, enjoying the food, music and shopping. When traveling in different countries, exploring the nightlife and economy can be just as important and seeing the people as they are. It raises important questions about development and sustainability that everyone everywhere can benefit from. But of course, these are conversations that have to be had.
Our time in Laos wouldn't be complete without adventure. Hiking into the caves nearby our Village and cooling off after a day of service at the nearby dam were among my personal favorites. For some, hiking into a cave was a new experience. But to mediate in the back of the cave in complete darkness was an awesome way to take it up another level! Kayaking down a river and swimming in the Blue Lagoon were all excellent ways to take a break from the hot and muggy days that were pretty much the daily weather conditions. Laos is such a beautiful place. The landscapes and horizons, sheer cliffs and rice fields make for beautiful walks out in nature. Many of the us took advantage of this by waking up early and going for a jog through the village. Of course...many did not and preferred to sleep in. Like me.

As our time in Laos came to a close, we had one final dinner together. Some of the village's elders came to eat with us and then, afterwards, treated us to a traditional celebration. After some words were shared by the chief about our work in the village and our time spent there, each of the elders came around to each of us and tied a white string around our wrists as they said a prayer and wished us blessings for our travel. The shaman was there as well with his wife which was especially nice.

Leaving Laos behind was difficult to do. The beautiful countryside, the warm and loving people, and the rich culture and traditions were so vibrant and so alive. Our time there was a gift and a blessing, and a journey that all of us were lucky to walk, and lucky to walk together.

As we said goodbye to the children (leaving our soccer ball behind for them), goodbye to the amazing women that prepared our meals and the men that taught us how to make cement and build foundation, and of course the dogs, we took a few last mental pictures of the cliffs and rice fields, took a deep breath as we loaded the vans, and began our journey back down the mountain and back to Thailand.

What a wonderful and beautiful journey of learning, leadership and adventure.